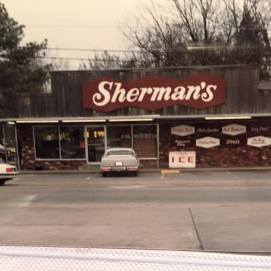 Charles & Rosalea Sherman opened Sherman’s Grocery Store in 1947 on the corner of South Main Street and Reed Road.  While it originally opened as a neighborhood grocery and meat market, they also provided their customers with delicious desserts, charge accounts and home delivery service.

In the late 1950’s Charles Sherman Sr. opened a deli in the rear of the store, which once served as the small apartment where he and Rosalea lived.   In 1970, Charles, Jr. returned from college to the family business, ran the deli and assisted his father in managing the grocery store.

Charles, Jr. and his wife then bought the grocery and deli from his parents in 1978. In October of 1984, Charles, Jr. decided to change the family business into a full-time lunch and dinner restaurant.  In June of 1985, Sherman’s Restaurant was born, with his family’s blessing.

In 2012, Charles, Jr. decided to retire for more time to spend with family and especially his 3 grandchildren.  He sold the restaurant to a local family,  Peter & Allison Nimrod.  Peter, a civil engineer and Allison, a business owner are both long time residents of Greenville where they are raising their three children.

After 28 years of building relationships and owning a successful restaurant, Charles, Jr. decided to retire.  He sold Sherman’s Restaurant to a local family,  Peter & Allison Nimrod.  Peter, a civil engineer and Allison, a business owner are both long time residents  of Greenville where they are raising their three children.  Here is the story, we hope you will enjoy…

Greenville — Roughly four years ago, Allison Nimrod, managing partner of an ultrasound company, approached Charles Sherman Jr., owner of Sherman’s restaurant, about buying his establishment. Friday, the Nimrods closed the deal on Sherman’s to become its newest owners. At the time, Sherman, who has operated the family-owned business for the past 27 years, said he hadn’t thought about selling the restaurant, but told Nimrod if he did, she’d be the first to know. Earlier this year, Sherman said he began to think about selling the restaurant, and Nimrod’s offer came to mind. “I think it’s very important for the community to have a local couple buy [Sherman’s] that everybody knows who’s lived in Greenville for years,” he said. Allison Nimrod said she started out in the food industry at the age of 15 and has always wanted to work in food service. Working everywhere from Shapley’s to burger joints, she said she knew food was always a passion of hers. “We passed by Sherman’s everyday,” she said. “We are always around town, and I just knew it was a very successful place and a good hometown place where people came to enjoy the food. “There would’ve been no other restaurant that we would’ve even considered.” Allison Nimrod and her husband Peter Nimrod, Mississippi Levee Board chief engineer, began negotiations with Sherman in February to buy the restaurant. Peter Nimrod, who grew up in Greenville, said he remembered when Sherman’s was changed to a restaurant and how it has always been a staple in the community, and they hope to carry on the business the way Sherman has. Although the Nimrods will be its new owners, they said they intend to keep the tradition of Sherman’s going by preserving its current name, menu and hospitality. The Nimrods said they want customers to come in and see the same people they’ve always seen and to receive the same service. “It was always known for fine dining, a casual atmosphere, high quality food and an owner who appreciated you being there,” Peter Nimrod said. The Nimrods said it is important to them to keep the same relationship with the community that Sherman has had all of these years, and they want to make sure everything is done right. “Mr. Sherman will continue on with us for four to six months in every aspect of business,” Allison Nimrod said. Sherman’s, first established in 1947, was opened as a grocery store and meat market in the heart of Greenville by Charles Sherman and his wife, Rosalea Sherman. The restaurant, located on the corner of Main Street and Reed Road, operated as a grocery store for almost 10 years before expanding to a deli. In 1985 Charles Sherman Jr. took over the business after his father became ill and has operated Sherman’s as a restaurant for the past 27 years. “My dad didn’t live to see me get it changed over, and that’s my only regret,” Sherman said. “But I promised him on his deathbed that I would give all the effort that was needed to hopefully make Sherman’s the best restaurant from Greenville to Memphis and Greenville to Jackson. … Hopefully I’ve fulfilled that promise.” Sherman said he’s had a good run with the business but “it’s time to turn it over to a very deserving couple.” Sherman said he wanted to thank all of his supporters, and he hopes that the community will support the Nimrods the same way it has supported him. “My family’s been on this corner for 65 years,” Sherman said. “It’s bittersweet moments for me. … but in the end, it was just time for me to leave.” The Nimrods said they hope to continue the relationship with the community and have every intention of running the restaurant “the successful way that it is right now,” Allison Nimrod said. “It’s a pretty big risk when new people take over a business,” Peter Nimrod said, “but we’re putting our money where our mouth is because we believe in Greenville. “Greenville has better days ahead.”

All Sherman’s customers continue to receive consistent, delicious food prepared with over 70 years of combined kitchen experience, by the same staff they know and trust. We are thankful to continue to serve the patrons of the Ark-La-Ms area as well as many pass through travelers. Through wonderful support and patience, we are looking forward to growing an establishment that is widely recognized as one of the area’s best all-around restaurants. Thank you for dining with us!

Too yummy to pass by! Read About Us on Trip Advisor

Please Check Us Out on Yelp

See What Google Has On Us